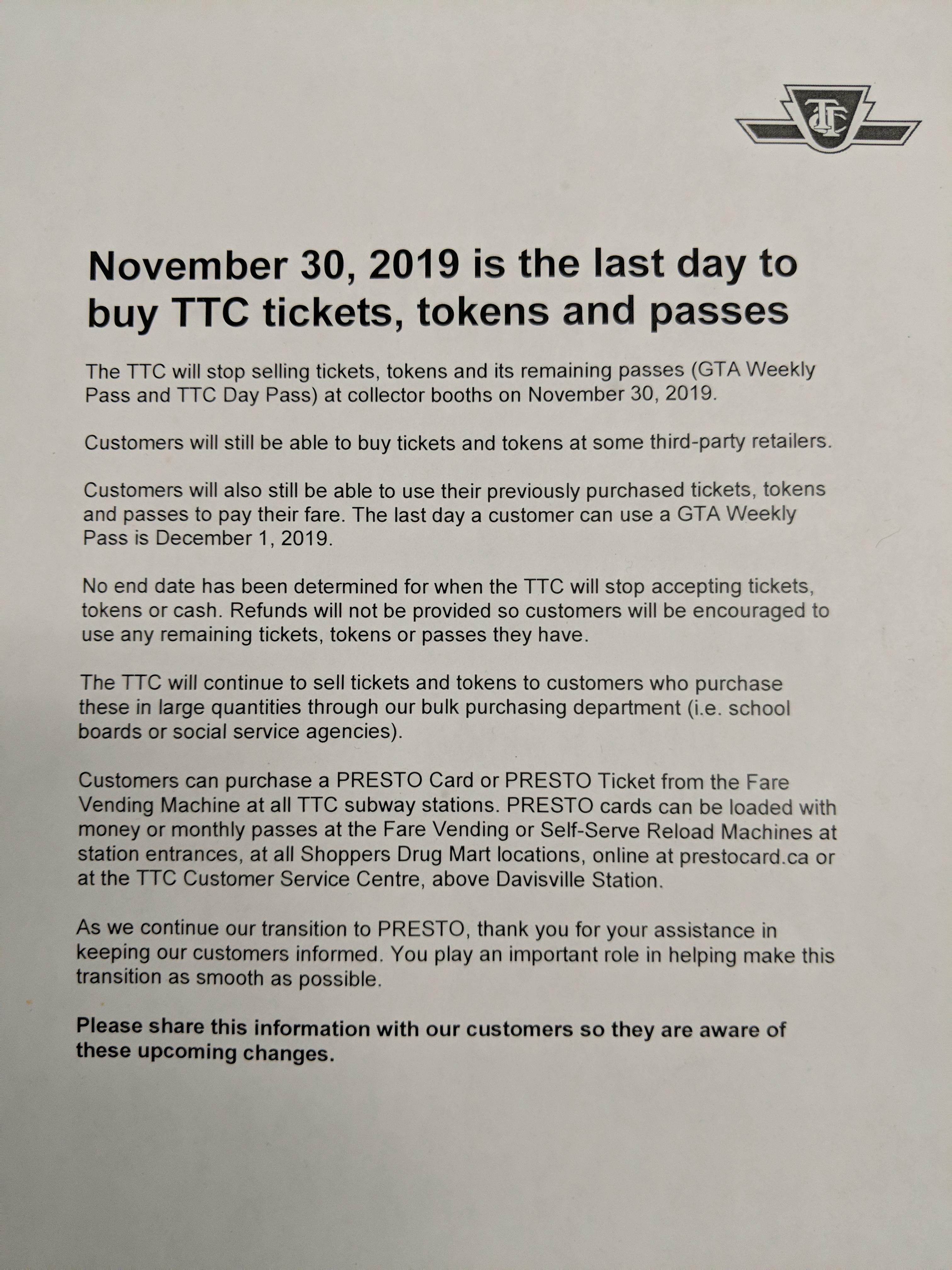 The TTC will stop selling tickets, tokens and passes (GTA Weekly and the Day Pass) at collector booths on Nov., 30, 2019. Customers will still be able to buy tickets and tokens at some third-party retailers.

TORONTO —
The Toronto Transit Commission will no longer be selling tokens, tickets or passes at subway stations starting Sunday.

The fare methods are being phased out as the transit system modernizes and continues to encourage people to use Presto cards to pay for travel.

Some third party retailers, and corner stores will still sell tickets and tokens, but TTC spokesperson Heather Brown says making the switch will be beneficial to riders.

“People are resistant to change, but what I would tell our customers is that Presto is a simple way to pay their fare,” Brown told CTV News Toronto Saturday.

She said that 83 per cent of riders have already switched over to Presto cards.

According to the Toronto Transit Commission, tickets, tokens and passes will officially stop being sold at collector booths on Saturday.

The TTC said a limited number of third-party retailers will continue to sell tickets and tokens, but encourage customers to move to a PRESTO card before Dec. 1.

PRESTO cards are available at all subway stations and Shopper Drug Mart locations.

The Toronto Transit Commission (TTC) says it will stop in-station sales of TTC tickets and tokens, as well as its GTA weekly and day passes, at collector booths by Nov. 30, encouraging customers to move to Presto cards.

However, the TTC said customers will still be able to buy tickets and tokens at some third-party retailers.

The transit agency said it’s encouraging customers to move to Presto cards sooner rather than later to avoid potential lineups for cards following the deadline.

Heads up for the legacy fare media hold-outs. Time to start thinking about that move to @PRESTOcard if you want to keep enjoying discounted fares.

The system will continue to accept tokens and tickets for now, but after Saturday TTC customers will only be able to purchase them at some third-party retailers like 7-11 and Shoppers Drug Mart.

“We realize that there are customers out there who have stockpiles of tickets and tokens, so we haven’t set a stop-accepting date in the system,” TTC spokesman Heather Brown said.

This week will be the last time Toronto commuters can buy TTC tokens, tickets or passes at transit stations in the city.

After November 30, customers will have to migrate to the Presto system, pay their fare in cash, or purchase the older fare types at select third-party retailers such as Shoppers Drug Mart.

The last day to use an existing GTA weekly passes will be December 1, as they and the daily passes won’t be issued anymore.

This copy is for your personal non-commercial use only.

To order presentation-ready copies of Toronto Star content for distribution to colleagues, clients or customers, or inquire about permissions/licensing, please go to: www.TorontoStarReprints.com

The TTC will stop selling tickets, tokens and passes at collector booths by the end of November as it completes the transition to the Presto fare card system.

While passengers can continue using previously purchased tickets, tokens and passes, the TTC is encouraging riders to use them as soon as possible.

According to the TTC, limited sales of tickets and tokens will continue to agencies and organizations like school boards and social services until a new program for distributing Presto cards is available.

The TTC has not set a date for when it will stop accepting tickets, tokens and day passes.

Presto is a fare card that’s tapped before entering a TTC bus or subway and can be purchased or reloaded on the PRESTO app.

The Toronto Transit Commission (TTC) has stopped selling tickets, tokens and passes at subway stations and has switched to its easier and more convenient PRESTO fare collection system.

PRESTO is a fare card that is tapped before entering a TTC bus or subway.

According to TTC, the PRESTO adoption rate among customers is 83 percent.

For most TTC customers, tickets and tokens are already a distant memory.

Customers have been able to use PRESTO across the TTC network since the end of 2016, with the rollout of the fare system to all subway stations and more than 2,000 TTC surface vehicles.

One reply on “The TTC will stop selling tickets, tokens and passes by end of the month | The Star”